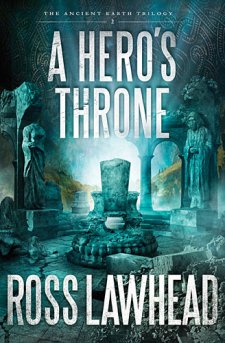 Deep beneath the streets of England lies another realm . . . one few in our modern world know exists. Daniel and Freya, however, know it all too well. Eight years ago, these friends first journeyed through portals into the hidden land of Niðergeard—discovering a city filled with stones, secrets, and sleeping knights that serve to protect the world they call home.

But Niðergeard has fallen to dark forces, overrun by its enemies. Gates are being opened between the worlds that should have been kept closed. The battle lines for the war at the end of time have been drawn, and opposing forces are starting to gather.

Having served for centuries as the first and last outpost at the borders to other worlds, Niðergeard must be reclaimed and the mystery of its fall discovered. Daniel and Freya, along with an ancient knight and a Scottish police officer, must return to the legendary city, rally the surviving citizens, and awaken the sleeping knights—knights who are being killed, one by one, as they sleep.

But time is running out faster than they know.

A Hero's Throne is Book Two in Ross Lawhead's “The Ancient Earth Trilogy”, and in many ways it follows the pattern of the previous book: modern fantasy mixed with ancient myth to create a tale that feels as ancient as the earth.

One of the primary characteristics of this book is the dreamlike – and in some cases, nightmarish – quality of the prose and story. A Hero's Throne often feels like it was taken straight out of a dream – strange and macabre visions where your friend might be your enemy, and your enemy always stays your enemy.

In fact, that was my main problem with this book: that there didn't seem to be any sides. “How do you fight with the wind?” says one character. “I have seen the hand that moves us in the darkness – a game of chess with all the pieces of one colour. A game of chance with a die that has just one side.”

Another character insists on trusting Ealdstan to lead them, when Ealdstan seems to be on no one's side but his own. (“Seems” being the key word. There “seems” to be a lot of things in this book, but as the characters find out, nothing is as it seems.) Freya struggles with herself and also chooses to be on her own side, rejecting both the words of her friends and the words of the evil Gád. Daniel trusts in his own “righteousness” and motives and ends up delirious; from lack of sleep or from being driven mad by Niðergard itself, it is hard to tell.

Besides this, however, the book was surprisingly good. The plot wandered (in that way it was similar to The Realms Thereunder) and there weren't really any twists, but it was enough to keep me reading and interested. The two main characters had fairly open motives, although it seemed that the motives of the rest of the cast were almost always called into question, or never explained at all. While the characters were sometimes confusing, in a strange way many were dynamic, such as Ealdstan and Vivienne.

The best part of this book was the world, in many ways. While Elfland apparently operates on strange rules (which are never quite explained), the “real” world has many ties to ancient mythology, most of the connections being the monsters and knights, both of which are beginning to wake up. It made the book feel solidly grounded in the best kind of fairy-tale.

Overall, I really did enjoy this book, but the irrationally dreamlike feel, combined with the lack of sides (that is, evil versus less evil), were serious drawbacks. I will, however, withhold my final opinion until I read the final book, which is scheduled to come out in 2014. The epilogue seemed to hint at a better resolution. If the good-and-evil situation is indeed resolved, then I think that plowing through the series will be worthwhile.

If you enjoy reading “paranormal”-type fantasy, however, then this book should be right up your alley. All in all, I rate it 7 out of 10.  3.5 stars.

(Please note that I received a free copy of this book in exchange for an honest review.)

Life is my excuse, as usual, for this unexpected hiatus.  I hope not to make this a habit, but I have been forcibly removed from this blog for some time.  (Oddly enough, Facebook appeared to be a permitted site.  Interesting how that happens, isn't it?)

The hiatus isn't just from this blog, unfortunately.  I haven't written anything by way of fiction since I last blogged, and I've only read a couple of books.  (The last one should show how busy I really am; it took me almost two weeks to read the steampunk novel I received in my grandparents' Christmas package!)

School started, too, and that dragged me down into an endless pit of double literature and pre-calculus.

Still, I hope that 2013 will start looking up.  If I can get my schoolwork under control (unlikely, but I can always hope) finishing up The Voice of God will be my primary goal for January.  Then, Will Vullerman.  Then, a leisurely time on Tornado C.

What about on here?  Well, I have quite a few articles brewing in my head, and hopefully an upcoming review on a new modern fantasy novel.

Oh, and maybe a chance to get some free e-copies of The War Horn, for those of you who don't have Kindle.  Sound good?

Hopefully I'll be back soon.  If I'm not, I blame Africa.  Living here is kind of a full-time occupation!

Email ThisBlogThis!Share to TwitterShare to FacebookShare to Pinterest
Labels: Africa, The Prophecies, Will Vullerman
Newer Posts Older Posts Home
Subscribe to: Posts (Atom)
Please note that this is a Christian blog, and that all tips, reviews, and recommendations are done from a Christian worldview.