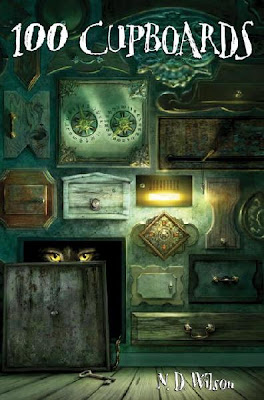 Twelve-year-old Henry York wakes up one night to find bits of plaster in his hair. Two knobs have broken through the wall above his bed and one of them is slowly turning . . .Henry scrapes the plaster off the wall and discovers cupboards of all different sizes and shapes. Through one he can hear the sound of falling rain. Through another he sees a glowing room–with a man pacing back and forth! Henry soon understands that these are not just cupboards, but portals to other worlds.  (Description from Amazon.com.)

As soon as I started reading this book, the writer got ahold of me, using the setting of the first chapter.  Any other placement, and I would have been neutral.

But no, it was the description of a small town in Kansas that did it for me.  What can I say?  I'm biased.  I love small towns. I love Kansas.  And both of my parents originated from small-town central Kansas.

That being said, 100 Cupboards started out well.  The writing was lighthearted and humorous, and, while the first few pages weren't the most exciting, the writing style kept me going.

As the story progressed and became more mysterious (and, as a whole, this is a very mysterious book), it grabbed my attention.  Weird things started happening.  And then the plot took off.

100 Cupboards was an easy read.  It took me around a day to get through it, and the pages went by fast.  Not a I-can't-stop-reading fast, but it was still engrossing.  The suspense level was high, mystery abounded, and there were several moments where the book sent a chill down my spine.  There were several surprising plot twists as well.

I found it very similar to the Dreamhouse Kings series, for younger readers.  Not as suspenseful, but the two series seem to have a lot of characteristics in common; portals, strange houses, unwanted people living in the house, etc.

For a novel targeted at teen/tween ages (the protagonist is twelve), it was surprisingly scary, and there was a lot of danger and intrigue.  This is not necessarily a bad thing, however.  There were, though, several edgy scenes that bordered on gory (like a description of an eyeless 'witch').

Now, if you were put off by my mention of a witch, let me warn you: there is some sort of dark magic thing going on in this story.  The main antagonist was  a twisted woman who uses some sort of magic to destroy places and cast spells (though they were not called such).  I was not bothered by it, as it was downplayed and I didn't really notice it.  (If I need to convince you, I strongly dislike the Harry Potter kind of magic, and this was not very similar at all.)

There were several downsides to this story.  While the characters were unique and well done, I didn't see as much development as I might have liked.  There were few difficult choices for the characters, and only a couple situations that revealed the good or bad aspects of their character.

There was also a lack of meaning in 100 Cupboards.  It was written to entertain, and not much more.  It's what I might call a "forgettable fantasy" that will just become another book I've read and liked.  It is a secular book, after all, though the writer is a Christian (as far as I know).

It ended well, with a hook at the end, indicating where the next book will lead.  I'll be reading the rest of the series for sure.

Overall, read it.  It's good enough to check out from the library, and you won't regret it.

Jake, N.D. Wilson is TOTALLY AMAZING! I haven't read this series yet, but his nonfiction book "Notes from the Tilt-A-Whirl" is one of my top five favorite books. I've heard this series gets progressively better. "Dandelion Fire" is supposed to be pretty awesome. I really want to read them.

I've listened to hours of lectures by N.D. Wilson and he truly is a great thinker, speaker, and writer. I'm sure these aren't going to be my favorite books and as these are his first published fiction books, I'm not going to be to critical. I'm just excited to see what he does next.

And yes, he is a strong Christian. He teaches writing and literature at New St. Andrews College.

I appreciated your review and I'll look forward to hearing what you think of the rest of the series.

I enjoyed this book when I listened to it. The characters were interesting, but yes, they were a bit underdeveloped.

It was a bit similar to the Dreamhouse Kings series, but there were enough differences to separate them.

Do you know what the next book is?

i loooove him!!!! I've read that whole series. :D I actually met him at a book signing. :D awesome!!!

Hey Jake,
If you really are opposed to the Harry Potter kind of magic, my suggestion to you is to not read into the series any farther. Why? Henry does become what some could call a magician. I understand why you would be all right with an evil witch using magic, and also why you prefer not to have a protagonist using magic. The characters were, yes, poorly developed, but I still liked it tremendously.

Hm, this sounds like an intriguing book. I probably won't get it, since it is 'secular' and, as you implied, it doesn't have much of a moral to it. However, the mention of mysteriously appearing cupboards and eyeless witches certainly tickles my palate.

I really want to look into the Dreamhouse Kings series; I've read up on it a fair bit and I'm most certainly interested in it, however our Christian book store just went out of business in our town :( and my parents aren't keen on buying from the net. So it looks like I'll have to wait until we travel a few towns over before I can browse the selection and see if they sell the series there. I'd order it in too, but ... umm... I guess I could do that XD never thought of it till now.

Thanks for this review, anyhow :)

@Miss Pickwickian
No worries. Long comments are nothing to apologize for. ;) Thanks for the feedback! Hope you like the book.

@Pathfinder
I believe the next book is "Dandelion Fire".

@Nahla
Glad you liked them!

@Christopher
All right, thanks for the tip. I can't stand reading one book and not the rest, so I'll go ahead with the series. I've read Harry Potter before just to understand why people like them so much, and I'm doing the same with the Ranger's Apprentice.

I don't like the concept of the protagonist using magic, no (unless 'magic' is used to refer to, say, Aslan's magic), but I'll still read the series and give my blog readers a heads up on what comes up next.

Last time I looked at stores like Mardel, they had Dreamhouse Kings. They're popular enough that you'll find them eventually. :)

Just a quick question about writing. Do you listen to music while your writing, why or why not? I don't usually but if you think its a good idea I might to it.

I know I'm not Jake, but I will say that I listen to music when I am writing (particularly film scores and classical guitar) and it can help a lot.

It depends. I sometimes listen to music, and I find that the kind of music that I'm listening to affects my writing. I especially listen to soundtracks like Lord of the Rings for that reason: they put me in "fantasy mode" and help me to focus. However, for slow and/or descriptive scenes, I would not use music.

A lot of the time I don't listen to music. It usually only helps when my writing is moving like molasses or if I'm writing a fight scene. Other kinds of music don't affect my writing, like rock or worship. They just drown out other sounds. ;)

Thanks for the advice!