Is it possible to overthink your ending?

My life is complicated, but sometimes I wonder if there's anything more complicated than the ending of my novel.

I keep telling myself that I'm "marinating it" - which means that I'm procrastinating and pretending I'm brainstorming at the same time.  And in some ways, that's good.  After rushing to finish my key chapters before the OYAN Workshop, a bit of a break is a good thing.

But a couple days ago I completely overhauled my outline's ending for the third time, and I'm wondering just how long is too long.

What freaks me out about this novel is that the ending has to be perfect, and I know I can't write it perfectly.
Stories have to be born ugly, but after writing over eighty thousand words building up to this climactic ending, I don't want it born ugly.  Ehhhhhh.

The picture in my head is so sad and so beautiful and hard, and if it doesn't come out that way then I'll be plunged into a dark pit of writer's purgatory for at least a week.  So apparently I think that revising the outline 293 times will help prevent this disturbing end.  Maybe it will, maybe it won't.  But I think in the end I'm just going to have to tighten my belt, straighten my fedora, and write it.

It still gives me butterflies.  I don't want to get it wrong.

But I guess that's what revision is for.

And this, my dear reader, is your random Jake moment for the day.  I felt a little guilty about not blogging for a month, so you get a chaotic monologue instead of something deep and insightful.  Happy day. 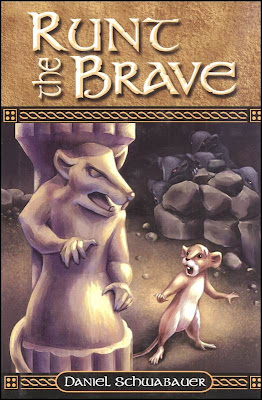 [Note: this review is of the original 2004 edition of the novel.]

Driven by its merciless leader, an army of rats has besieged Tira-Nor. The city's last hope lies with a mouse so small and so young that even his family calls him “Runt.”

But it is not just the rats who want JaRed son of ReDemec dead. A cold shadow stalks the war-darkened tunnels of the underground mouse city. A bodiless evil threatens to bring the myths of the Ancients suddenly comes to life.

Betrayed by a hatred as thick as blood, surrounded by enemies too terrifying to comprehend, JaRed is about to encounter a power beyond even that of the Great Owl...a power that will fling him into a destiny wilder than anything he's ever imagined! (From the inside flap.)

Daniel Schwabauer is a master storyteller – and you think you've heard that one before, too. Think again! Mr. Schwabauer has entered a well-established sub-genre of fantasy and created a totally original tale. Combining a hauntingly beautiful mythology with a tale set in a mouse city preparing for war, Runt the Brave is a wonderful tale of loss and jealousy and bravery.

Originality is not having a new story idea, but putting a new twist on an old story idea, and Mr. Schwabauer does this masterfully. Inevitably, stories like this get compared to Redwall or Watership Down, but I think Runt the Brave can stand on its own quite well, and of the three, Runt the Brave is probably my favorite.

The plot is fast and keeps the pages turning, and the world-building is excellent. Like I've already mentioned, Mr. Schwabauer has created a unique world and a “rodent” mythology that works very well for the storyline. And as for characters, I've rarely seen them better. Each character is layered and well-written. The two “main” characters, HaRed and JaRed, both have incredibly real character arcs, and the supporting characters are also very well-done.

The style of the prose is likewise unique. It took a little getting used to at first, since the style is heavily narrative and sometimes relies on “telling” in order to keep it narrative. However, after the first few chapters I stopped noticing it and let the story carry me away.

And finally, the theme. Let me pause for a moment here to say that this was a deeply moving and wonderful novel. I've said it again and again; I'm a sucker for a good theme, and Mr. Schwabauer has created a novel with themes straight from his heart. And those are the best kind, because those are the ones that will touch other people.

I'll say it in a sentence. Runt the Brave is a fantastic and moving novel that goes straight from the heart, to the heart. I love it. 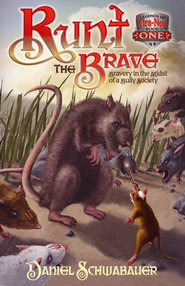 And here's a bit of advertising: Daniel Schwabauer is the creator of the fantastic One Year Adventure Novel (OYAN) curriculum. Runt the Brave has recently been republished with AMG Publishers, with the new cover to the right. Here's a link to it on Amazon.

Here's the best part: the royalties for this book go towards making a creative arts center, referred to by the OYANers as Hobbit Holes. I talked about this incredible vision in my blog post about the OYAN Workshop.


So whatever you do for this book contributes towards Hobbit Holes. So buy it, share it, tell other people about it. Daniel Schwabauer (always and affectionately “Mr. S” in the hearts of OYANers everywhere) has shared his vision with us, and we want to pass it on. Consider doing a small part.