On Tornado C and the OYAN Summer Workshop

Today is my last day of school.

That means a variety of things, among them being jubilation and a tangible sense of freedom from slavery.

Probably one of the most important things is that I'll finally have time to focus on Tornado C.  I've been writing in it here and there as the weeks have gone by.  The current word count is somewhere north of fifty-five thousand words, and I'm about halfway through.

This poses a problem, however.

Much to my delight, last month I registered for this year's OYAN Summer Workshop (referred to by OYANers as the "SW").  The Workshop will be graced by the presence of some famous authors (among them being Jill Williamson and Jeff Gerke), and numerous internet friends.  If my count is correct, there are just twenty five or twenty four days left until the SW begins.

How does this pose a problem?

Well, the good news is, I'm halfway through my novel.  The bad news is, I'm halfway through my novel.  It's taken me a year to get there, and I've got roughly twenty-four days to get to the end—or at least the beginning of the end.  The Workshop involves bringing copies of your manuscript, four pages from each of your "four defining scenes".  Unfortunately two of those scenes haven't been written yet.

On the flip side, if you're going to the SW, perhaps we'll meet in person!  That would more than make up for the silence, wouldn't it?

I'll try to periodically update and perhaps even write something interesting (for once), but like always - there are no guarantees!  (That sounds familiar, doesn't it?)

Review: "The Hobbit: An Unexpected Journey" 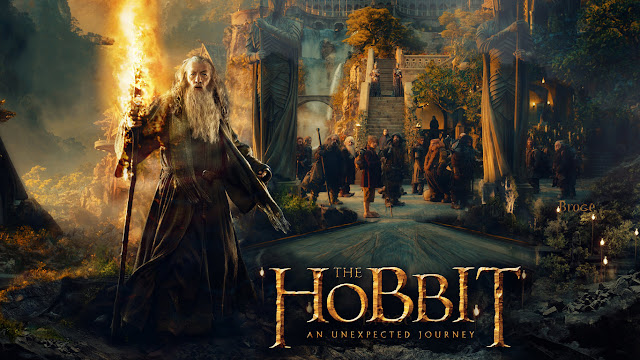 (Note: this is a fairly exhaustive review. Rather long and meandering – kind of like the movie, come to think of it. ;) There are probably some minor spoilers, but I stayed away from revealing major plot points.)

As hard as it might be to believe, until very recently I had yet to see the Hobbit movie, despite having been in America for some time.

Being a writer, the best way I process things is by, well, writing. So write I will! Here are my hasty and sincere thoughts on Peter Jackson's adaption of Tolkien's “fairy-tale”.

The Book and the Movie

The best way to approach the movie, I think, is to view it as an entirely different story than the book; or, as I put it to a friend of mine, two different adaptions of the same essential story. One in words, and the other in pictures.

But before I do that, how did the movie compare to the book?

Peter Jackson had a tough issue, and that was marketing the Hobbit to a Lord of the Rings audience while simultaneously “setting up” the saga that follows, something the original story didn't do at all. This required several things, such as removing some of the “whimsical”, fairy-story feel and adding in more “epic fantasy” elements. This is a hard job, and he's bound to make both purists and Lord of the Rings movie fans mad in the making.

Overall, I think he did well. Jackson compromised between a purist standpoint and an epic fantasy standpoint in finding elements that were not in the Hobbit itself but were part of Tolkien's story-world nonetheless. This would include the White Council (taken out of order), Azog the White Orc (who really was from Moria but had actually been killed), Radagast (who had a very minor role in The Fellowship of the Ring book but did exist), the Necromancer (taken out of the Return of the King appendices and other sources), and giants (who were hardly as colossal in the book). This allowed Jackson to use Tolkien's own works in a way that would work better on the big screen.

Okay, now that I've finished with that, I'll address the movie itself, purely on its own merits, not how it measures up to the book.

As could be expected from a three-hour movie made from one hundred pages of a children's fantasy novel, the plot meandered from place to place. The introduction of the White Orc and the Necromancer helped move the plot along some, but the main reason why they didn't propel much was because there was little to no resolution of their plotlines at the end of the movie. Really, I think that was the most disappointing thing about the Hobbit: zero resolution. We jumped around some, had some adventures and whatnot, but the only resolution was in the relationship between Bilbo and Thorin (more on that later). Everything else was left open-ended.

This isn't to say, however, that I wasn't interested. Sure, the plot meandered, but I had a lot of fun meandering with it. Sure, it could have gone faster, but I didn't mind going slowly. So that lets Peter Jackson off the hook, a little bit.

I must say, one of my favorite parts of the Hobbit was the dialogue and overall quality of the work. The dialogue is easily as good as the original three LotR movies, and perhaps, in some places, better. Certainly it's a lot lighter. The movie was peppered with humorous quips and one-liners, something that was lacking in LotR. And, as I discovered the day after I watched the movie, it's just as quotable as LotR, especially in the troll and Gollum scenes respectively. (“Teefes! We has nine!”)

And by “quality”, I mean the little things throughout the movie that don't get their own “category” like plot or character, but enrich the movie in innumerable ways. Gollum's facial expressions, for instance, were priceless. The filming was simply beautiful. The soundtrack was incredible. (Howard Shore's mix of old and new themes was excellent.) The sets were tastefully done, the costumes were fantastic, the dwarves were distinctive—you get the point. There are a lot of little things that make the movie great.

The only thing I thought was off was the Goblin King. He was kind of...weird. A little cheesy. He would have gone down better if he hadn't had such a strange voice. I mean, normally goblins and orcs are hoarse and brutal-sounding, but this guy had no voice editing at all. And he was kind of sarcastic and weird and had a massive double chin.

Something that was distinctive about The Lord of the Rings was that, despite the action/adventure feel, the character development was incredibly good. How did it work out in the Hobbit?

Let's start with the main character, Bilbo Baggins. He starts off as a quiet well-to-do hobbit who doesn't want any adventures—thank you, good morning. He ends up as a volunteer on a quest to take back the dwarf kingdom of Erebor, where he could get roasted or skewered or be late for dinner. Is it done well?

I think so. While I think the spotlight was on Thorin a little too much, Bilbo's character evolved fairly well, with some really shining moments—his last scene with Gollum, for instance, or his scene with the White Orc. I was afraid that I'd think of Martin Freeman, the actor for Bilbo, as 'Watson' the whole time (he acts as Dr. Watson in BBC's “Sherlock” TV show), but I think he did a good job. Perhaps a little too skittish, but that should resolve itself in the coming sequels.

While most of the dwarves didn't get enough screen time to really “show” their character (other than Balin, I think, who was very well done), they were distinctive enough that you could tell them apart. (Except for Fili and Kili. I always get them mixed up.)

Gollum was in top form in the Hobbit. He's funnier and, in some ways, even better than he was in LotR. The events that would happen later, in LotR, were foreshadowed well.

And I feel I must mention the White Orc for a moment. Zero characterization there, even for an orc. Basically, his only motivation for trying to kill Thorin is that he “swore to wipe out the line of Durin”. He might have cause for revenge on Thorin, but that was barely noted. He might be a character necessary for plot, but at least they could make him more interesting.

The last major character was Thorin. I have mixed feelings about him. While he's a brash character and very pigheaded, he's likeable in some ways as well. Two scenes really helped endear me to him, I think—the “flashback” where Balin is telling Thorin's story to Bilbo, and the final scene of the movie.

Overall, while the character wasn't quite as stunning as the original trilogy, it was adequate enough for the first movie.

My favorite subject. It's usually tied to characters, so how did it do this time around?

There was really one theme in the Hobbit, but it was expressed in various ways. The main one was the relationship between Bilbo and the Company, mostly played out with Bilbo's interactions with Thorin. Did Bilbo belong? Why should he stay?

I was a little surprised by Bilbo's answer when asked why he stayed with the Company. “Because I have a home, and you don't have a home.” While it's a nice theme, it had the potential to be a lot stronger, especially when contrasted with the main themes of Lord of the Rings. I think a better motivation would be tied to the need for justice and the cause of good.

But really, the main theme of the Hobbit was said by Galadriel: “Why Bilbo Baggins?”

And Gandalf's answer to that question makes that scene my favorite in the entire movie. The soundtrack (beautiful), the acting, the placement, all of it supplements the words that Gandalf says at that part and sums up the theme of the Hobbit. And really, the theme of the entire “Lord of the Rings” saga, the Hobbit included.

I won't spoil anything. (And part of it is that I can't remember the exact quotation off the top of my head.) But it is definitely a fantastic theme. I hope it comes out a lot more in the later movies!

It's Not The Book

The Hobbit movie is not the Hobbit book. Some people hate the movie because of that. Some people think it's a money-making franchise.

Taken apart from the book, however, and being seen as a prequel to the Lord of the Rings movie trilogy, the Hobbit delivers. The plot meanders, but the same themes and characters are woven throughout the movie. It's witty, it's well-made, it's a continuation of the well-beloved saga. More importantly, it promises a lot more epicness to come.

And my goodness, I could quote it all day.

Email ThisBlogThis!Share to TwitterShare to FacebookShare to Pinterest
Labels: J. R. R. Tolkien, The Hobbit
Newer Posts Older Posts Home
Subscribe to: Posts (Atom)
Please note that this is a Christian blog, and that all tips, reviews, and recommendations are done from a Christian worldview.