I've only got one picture for you.

In Sum: Twelve States and NaNoWriMo

The title says it all.  In the last three weeks I've been in twelve states, traveling everywhere from the Midwest to the East Coast.  It's been fantastic, seeing all of these new places and old friends - that being said, there are other things that have been neglected. 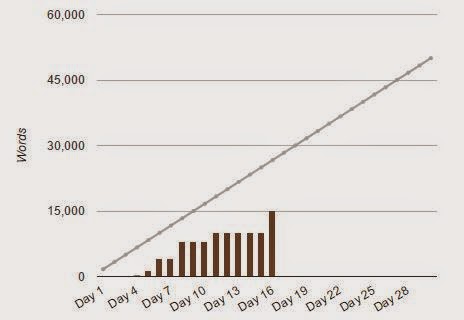 Yeah, 15,000 on Day 17 isn't the best of stats.  (I have a car drive coming to recoup some of that, however; we've got a long stretch of Oklahoma ahead.)  But I have the best of excuses!  Eleven states and over 24 hours' worth of driving is no small thing.

My NaNoWriMo project is my first nonfiction work, a memoir of the past year's events.  It's called "Safe to Shore: A Missionary Kid's Journey Through The Liberian Ebola Crisis".  So far I'm up to this past May, and I still have a long road ahead.

That being said, I'm worrying about running out of words to say.  We'll see!  Worst comes to worst, I'll write the last half of my newest Will Vullerman story to add up the word count.

How about you guys?  Anyone here blowing up their brains - er, doing NaNoWriMo?  How badly are you dying?  What's your word count?

Till next time (and hopefully it'll be sooner),