I return to this blog once again on the eve of a great battle.  By that, I mean internet advertising.  Pretty exciting, huh?

Okay, not really.  But this is an extremely good cause.  Some time ago, my lovely and talented sister made a video for a full-tuition scholarship at Abilene Christian University.  It's about some of her experiences and service from our time in Liberia.  (Naturally, it's kind of a big deal, since college is ridiculously expensive.)

Last week, we learned that she made it to the finalists - the top ten videos!  (I knew she would.  And that she would probably win.)  However, she does need some help to get further in the contest.

In order to advance, she needs to get oodles of votes on her video.  While I don't think that's the best way to choose the "best video" - I mean, obviously hers is it - it IS very crucial.  This only goes on till tomorrow night.

With that in mind, I humbly and fervently ask you if you would take a few moments to vote for her video.  (And if you try to pass it over...well, just think what YOU would do if you had thousands of dollars in scholarships on the line! Hmm?)

So here's what you do.  Three things count as votes: voting for the video on the ACU site, liking it on YouTube, and resharing it - WITH the YouTube reshare button.

Here's the link. Her video is the one on the top right - "Alexandria Buller".  Also, enjoy just how amazing the video is and take some time to watch it.  Pretty awesome, huh?

Sorry for the spam, but it's not really spam.  You can just take this as a long and passionate [free verse] poem in honor of my talented sister.

Thanks, guys!  Till next time.

Why "How To Train Your Dragon 2" Beats "The LEGO Movie" 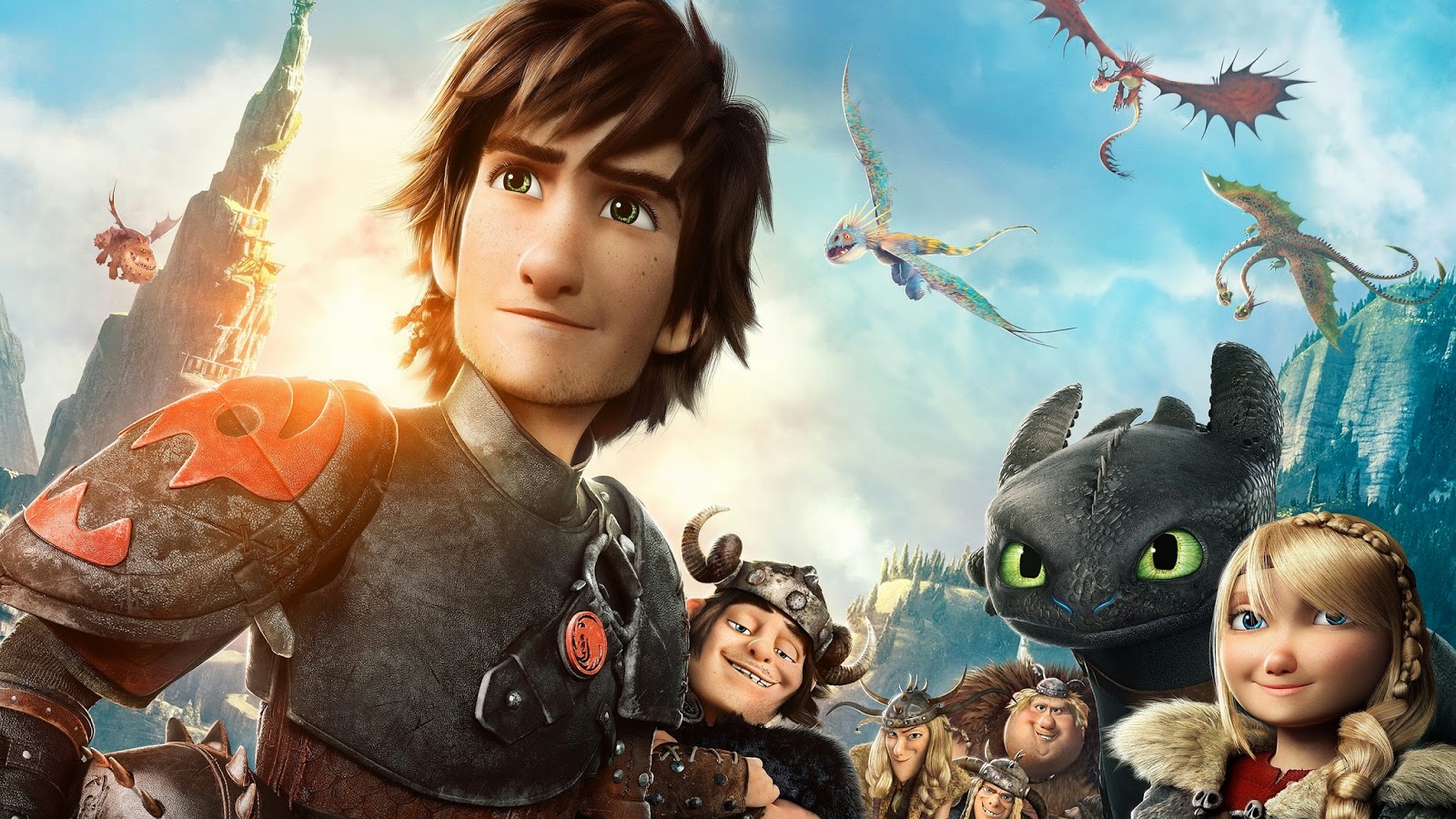 Yesterday, How To Train Your Dragon 2 won Best Animated Feature at the Golden Globes.  Which is a pretty big deal, considering that it's a sequel (the only sequel to win Best Animated Feature was the stupendous Toy Story 3), and that DreamWorks Animation has never won a Golden Globe before. Hardly had the award been given when a number of people began complaining that The LEGO Movie should have won.

And y'know, people will complain.  It happens every day.  But this time, the complaints have teeth; judging from the hype around the Oscar nominations alone, The LEGO Movie was a clear favorite.  It had an innovative animation style, a surprising originality, more laughs-per-minute than any other animated movie in recent history, and an ending that actually made you think, rocketing a really good Warner Bros. cartoon into the realm where the really good stories live.

But despite everything going for The LEGO Movie, I agree 100% with giving the Golden Globe to Dragon 2, and I'm cheering it on to scoop Best Animated Feature at the Oscars.  Why?  Well, if you guessed that I'm about to tell you, you're right.  Let me lay it out for you.

1. How To Train Your Dragon 2 is a sequel that didn't flop.

That in itself is an achievement.  So many movies go on to make sequels that are second-rate - while animated sequels seem more likely to do well than their live-action counterparts, DreamWorks' recent disaster with Penguins of Madagascar comes to mind.  How To Train Your Dragon 2, in contrast, demonstrated even more emotional depth than the original, scoring very well in the storytelling department. The only other animated films to accomplish this, in my opinion, were the Toy Story sequels.

The box office shows the same result.  Even despite the slightly disappointing domestic run (it got $177 million, $40 million less than the first movie), it ended up making up for it by totaling over $618 million worldwide.  (The first movie ended just below $500 million.)

2. How To Train Your Dragon 2's masterful animation.

Obviously, the animation was excellent; but there were several technological innovations introduced in animating How To Train Your Dragon 2 that hadn't been seen before, such as "scalable multi-core processing" that lets animators see their work in real time, and new programs that allowed DreamWorks to animate with more subtlety and detail.

Does it beat out The LEGO Movie's imitation stop-motion and stunning work with rendering realistic LEGOs?  Not really.  But Dragon 2 is not without its own innovations.

3.  How To Train Your Dragon 2 has incredible storytelling.

This is by far the main thrust of my argument, so let me unpack it a little bit more.

The emotional story of Dragon 2 comes in two main segments, which cross over one another often throughout the movie: first, Hiccup growing older and maturing, and second, Valka, and all the emotions she brings out in both her son and her husband.

Both resonate immensely.  Hiccup's struggle to cope with the expectations of his father - even if they're more reasonable than in the first movie - and his journey of maturity are things that reach out especially to the young adult audiences.  And the tremendous emotional turmoil that comes about when Hiccup - and Stoick - discover that Valka is alive is the high point of the whole story.

For me, it comes down to two back-to-back scenes in the middle of the movie.  First is when Stoick sees Valka for the first time.  He advances, and she begins to back up, her voice growing more and more pitched as she struggles to defend herself, while he never says a word.

And finally, he says, "You're just as beautiful as the day I lost you." It's unexpected, it's poignant, and those ten words express more character development than is contained in the whole of Penguins of Madagascar.  It shows how Stoick has changed, as his relationship with his son has changed.  The original Stoick would have argued back - but the new Stoick simply murmurs a single, beautiful sentence.

This leads into the second song of the movie (the first being Jonsi's "Where No One Goes"): "For the Dancing and the Dreaming".  It's about them falling in love again - and that whole emotional journey is summed up in a single song.  Watch the characters as they move through the scene - how their expressions change, how their singing changes.  Stoick sings strongly, tapers off, and Valka hesitantly begins singing along.  And Hiccup's eyes shine as he sees who they are, stripped of the emotional baggage.  It's subtle, moving, and the song itself is beautiful.

In my opinion, those two scenes are some of the most emotionally mature and powerful scenes in recent animation, easily rivaling Pixar in depth.  Shoot, they're better than most of the live action movies that come out nowadays, regardless of genre.

I could go on.  Hiccup and Astrid's first scene is wonderful, and I could rave about the incredible and heartbreaking twists that occur closer to the end of the second act.  (For instance, the tune of "For the Dancing and the Dreaming" is played throughout the "Stoick's Ship" scene - it kills me every time I listen to it.  Gah.)  But I think you get the picture.

Granted, How To Train Your Dragon 2 is not without flaws.  It suffers from several issues in the last third, and a painful voice-over at the end that sounds like it should be in the TV show, not the movie.  Still, I don't think it comes close to eclipsing the fantastic storytelling of the rest of the film.

The LEGO Movie has its own depth and character development.  There are several scenes that develop Emmet and Wyldstyle in ways not often seen in animation, and the closing scenes are pure storytelling brilliance, bringing everything to an emotional head and a satisfying resolution.  But as good as it was, it was not nearly as mature or emotional as How To Train Your Dragon 2.

I'd gladly welcome more movies like either one of these two.  Both are excellent, and both deserve recognition.  But in my honest opinion, all of the innovative animation and deep endings in the world can't touch the storytelling depth of How To Train Your Dragon 2.

(Post Scriptum: this post is a deviation from what I normally write on here, but I hope you'll still find it relevant.  Being an animated movie critic is something of a hobby of mine, so when the opportunity came to articulate my opinions on a recent animation event, I couldn't resist.

Let me know what you think; if you find posts such as this interesting, I could definitely write them more often!)
Posted by Jake at 1:11 AM 2 comments:

Email ThisBlogThis!Share to TwitterShare to FacebookShare to Pinterest
Labels: DreamWorks Animation, How To Train Your Dragon, Pixar
Newer Posts Older Posts Home
Subscribe to: Posts (Atom)
Please note that this is a Christian blog, and that all tips, reviews, and recommendations are done from a Christian worldview.