Ebola and Book Releases: A Quick Update on Life and Writing

Ebola and book releases might be unrelated topics, but they're united in this post: as a result of the recent Ebola outbreak in West Africa (including a massive surge in Liberia, where I live), the release of STASIS may be delayed.  At the very least, it will be released sometime in August.

The Ebola outbreak has hit close to home, with two of my friends and fellow missionaries falling sick.  (My dad and his friend, Dr. Brantly, are pictured in the article I linked to.)  Because Ebola is a typically deadly disease, the news has been devastating for the whole missionary community.

It's been a very rough past few days.  It's been a mess of emotions and stress, and your prayers would be highly appreciated - both for my family and for my two friends who have contracted the virus.

I have had some time for marketing and making banners such as this one, however: 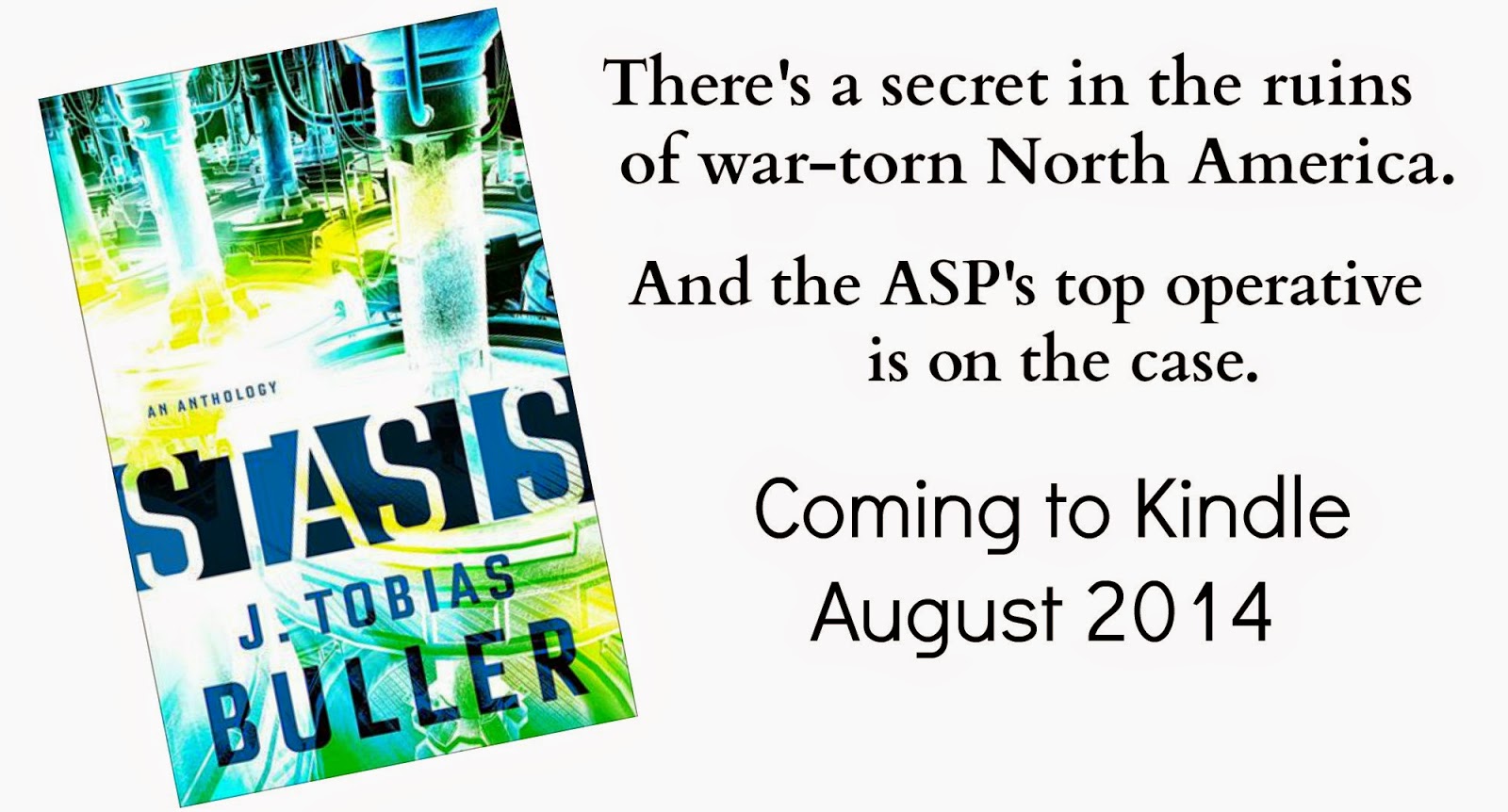 I don't know when exactly STASIS will be released, but I'll be updating the Will Vullerman Facebook page as often as I can.

And again, please pray for Liberia and for the current Ebola outbreak.  I'm sorry I don't have the time or energy for a more in-depth post; however, there are a number of articles from Samaritan's Purse and SIM that sum up the situation very well, with more emotion and clarity than I can muster right now.

Thank you for your thoughts and prayers.

Writing and releasing Will Vullerman has been a long journey.  I came up with the first story, "In Stasis", shortly after moving to Liberia, typing it out in OpenOffice Word on my dusty Compaq.  One story became two, became three, and the series finished out in five parts—"The Thirteenth Call" ended up being so long that I had to divide it in two.

It's been a long time since these stories were finished, and the stories have changed since then, and the anthology has grown to more than forty thousand words.  "The Immortal Man" has been almost completely rewritten, and "The Thirteenth Call" went through several drafts.  But now they're finished, and formatted, and ready to be shared with the world.

But not without a fantastic cover!

I've always been careful not to release anything with cheap-looking art.  And this time, I chose to go with a professional cover artist in order to receive a cover that would look top-notch and reach readers who may not have heard of me before.  (The artist is the brilliant Kirk DouPonce of DogEared Design.)  And the results were awesome!  But enough with the monologues: feast your eyes! 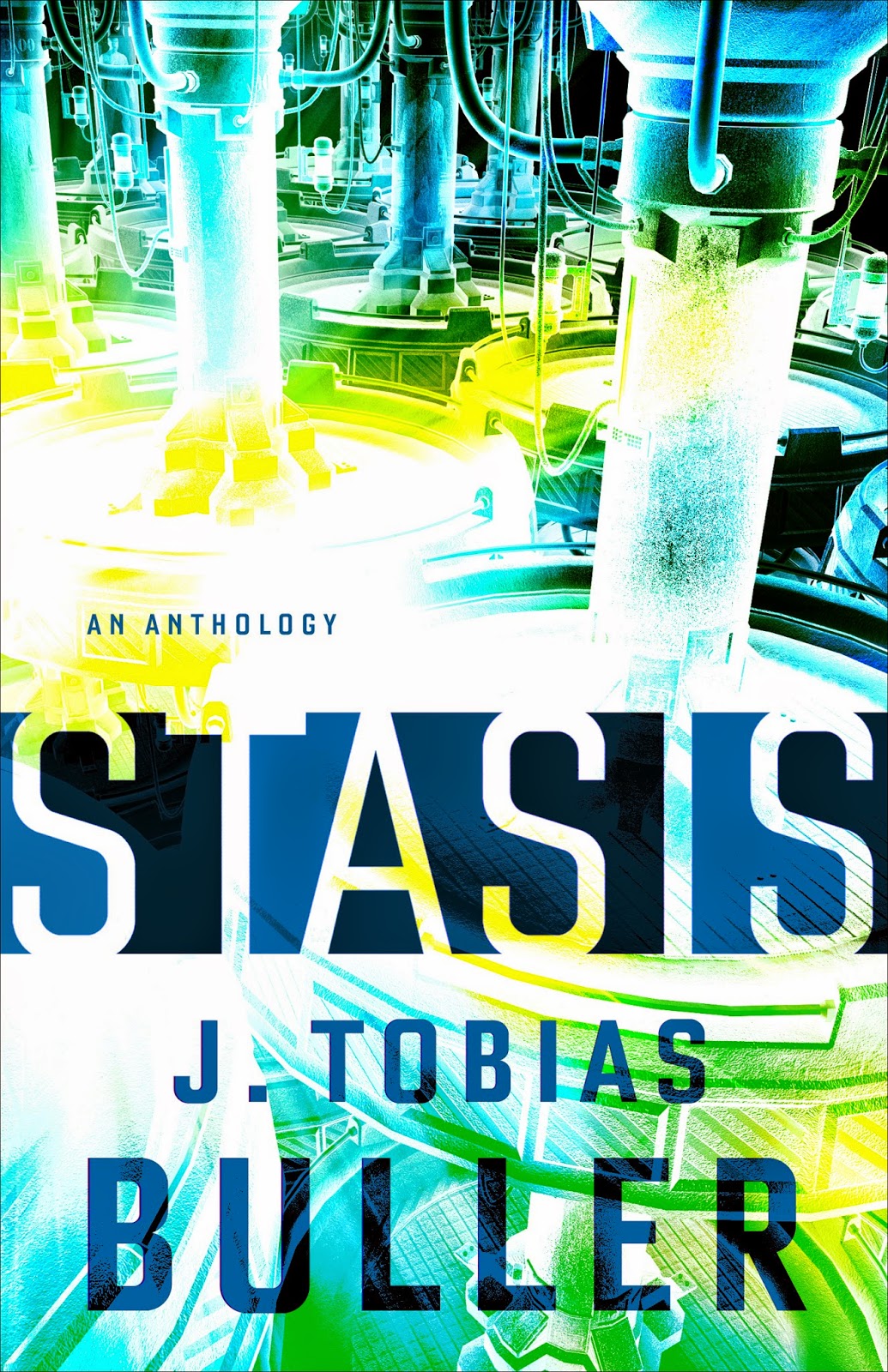 STASIS is due to be released sometime in the next couple of weeks—I'll keep you guys posted!  Due to the experience I've had with other e-book sites (a lot of work for few sales), STASIS will be released exclusively for Kindle late July/early August.

And, of course, here's the official synopsis, to whet your appetite:


Will Vullerman's job isn't easy. He's the top operative of the ASP—a secret agent for a new age. Sure, it might be a dangerous job, but he relishes the thrill of a mission accomplished.

But when a mysterious signal is picked up from war-torn North America, it is Will who is sent in—and what he finds there will change the world.

A hidden labyrinth deep beneath the ground—a ring that can alter your sense of reality—the dangerous secret of an illegal genetics facility—all this and more will test Will's strength and character. The stakes are high, and one wrong step could mean failure...and death for the people he's trying to protect.

Will Vullerman's job may not be easy, but it's about to get a whole lot harder.

(Any opinions you have on the synopsis would be most welcome!)

There you have it!  Feel free to spread the word: STASIS, Summer 2014!  And if you have a moment, consider liking Will Vullerman's Facebook page, to keep yourself up-to-date on all the latest Will Vullerman news.

Email ThisBlogThis!Share to TwitterShare to FacebookShare to Pinterest
Labels: Will Vullerman

Hey, readers!  Just a few short minutes ago I received the cover art for my Will Vullerman anthology, "Stasis".  And might I say - it is fantastic!  I can't wait to share it with you.  And I think it'll go very nicely on Stasis's Amazon page when I release it later this summer.

But all good things come to those who wait.  I'll be revealing the cover art of Stasis TOMORROW - it'll build up some suspense and excitement.  Along with the cover, I'll give an official synopsis for the anthology.

If you haven't already, consider liking the Will Vullerman Facebook page.  I'll be posting more updates on there as I get closer to the release date, and the cover should release on there about the same time as it does on here.

See you all tomorrow!

Email ThisBlogThis!Share to TwitterShare to FacebookShare to Pinterest
Labels: Will Vullerman

The more I work at ironing out my plots and trying to make every word count, the more I admire good storytelling.

Like Pixar movies. Even Pixar movies I've seen a dozen times never cease to amaze me. There are little things here and there - original, streamlined, no-more-no-less storytelling that make each movie simply incredible.  The plots may be simple, but simple isn't a bad thing.

They're deceptively simple, in fact. It's *hard* work, making every scene of your story lead to the next scene - making everything fit together in one understandable and cohesive whole, to raise the stakes little by little.  Simple?  Maybe.  But you should never judge how hard something is till you've done it yourself: and writing a streamlined story is a lot harder than it looks.

It's confusing and tiring work. And I'm just starting to learn that simple is often better than complicated.

Somehow, Brad Bird can tell a better story with a rat in Paris than I can with a haunted teenager in a complicated fantasy world. And I think any writer could benefit by studying just how he and other Pixar directors do it.

All I'm saying is, if I ever get half as good at telling stories as Andrew Stanton or Pete Docter or Brad Bird or John Lasseter, I might actually be able to turn my good ideas into good stories. Here's to hoping.

What about you?  What are your stories, the ones that you fall back on when you need a reminder of what good storytelling looks like?  I'd love to hear your thoughts.

Irregular pacing is one of the battle cries of the critic; and I think it means that we know something is wrong, but can't quite put our finger on it.  We chalk it up to pacing.

To some extent, that's true.  Bad pacing can make a whole novel feel “off”.  It can ruin an otherwise good story—and it's got to be fixed.

And there's a way to do that.  But first, let's define just what pacing is.

It's your novel's speed.  Sometimes readers describe novels as “fast-paced”—page-turners.  The pace of your novel is how fast the reader wants to read—and it's directly related to how urgent and tense the scene is.  The more intense the scene, the faster the pace.

So irregular pacing is where your novel alternates between a fast pace and a slow pace too often or too quickly.  A well-paced novel starts out with a certain level of tension and gradually increases the tension as the novel goes on, until it comes to a climax.  A badly paced novel starts out with a lot of tension, drops it, picks it up again—it's not measured and regular, which is where the term irregular pacing comes from.

Let me clarify that slow pacing is not a bad thing.  It can be very good if used correctly.  After all, what's a novel without a few conversations around the fire?  What about when characters are talking about their past?  What about all those deep moments that make you feel warm and fuzzy inside?

Properly spaced, these deep moments can have a huge impact.  They develop the characters and endear the reader—and they give you a little bit of breathing space before going on to the next conflict of the story.  A story without slow moments feels rushed and hurried.  Even “action” movies like Captain America: The Winter Soldier have slow moments where the characters just talk.

So how do you fix bad pacing?

First, figure out where it is.  The biggest clue is a feeling that something is “off”, a little niggling at the back of your head that something feels wrong.

I recently encountered this while revising Chapter Ten of my novel.  My characters are en route to the worst prison in the country, and the scene I was rewriting took place shortly after a very intense conflict.

But for some reason, the scene wouldn't work.  I cut the excess dialogue (nearly three hundred of the fifteen hundred words), reworked the action beats, and did everything I could think of to make it interesting.  The dialogue was fine, the prose was fine, but it just didn't feel right.

It wasn't until this morning that I figured out what was wrong.  The pacing was off.   The fifteen hundred words of banter and character explanation just didn't feel right, sandwiched in between two high-tension action scenes.

Once you figure out where the pacing problem is, like I did, either cut or relocate the scene that's causing the problem.  In this case, I cut most of the scene,  which allowed me to maintain the tension level.  What was left of the scene, I rewrote into a separate scene that takes place after the tension drops off a bit more.

Sometimes a whole section of your story is causing the problem.  Find out why.  Oftentimes, things are too easy—I had that problem several times.  The solution?  It's easy: brainstorm ways your characters' plans could backfire or go wrong.  Then, do it!  Nothing helps a dragging scene like an unexpected disaster.

Fantastic novels are well-paced.  If you can learn how to detect and fix pacing problems, you'll be ten steps ahead of everyone else.

What about you?  What's been your experience with the mystical concept of “pacing”?

Email ThisBlogThis!Share to TwitterShare to FacebookShare to Pinterest
Labels: Pacing, Revision, Revision Tips
Newer Posts Older Posts Home
Subscribe to: Posts (Atom)
Please note that this is a Christian blog, and that all tips, reviews, and recommendations are done from a Christian worldview.