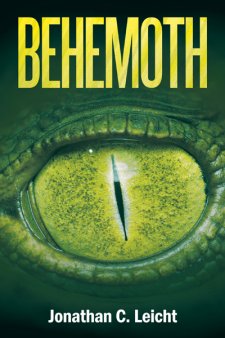 Jim Thompson, chief game warden of the Masai Mara Game Reserve in Kenya, has a major problem.  Three of his prized elephants have been gored to death in the past month.  The only clues left are mysterious tracks reportedly belong to a creature long thought extinct.  Thompson suddenly finds himself on a tumultuous adventure as he travels across the African continent, hoping to convince himself and the world that he is on the verge of an incredible discovery.

He is not alone.  On the other side of the world, Professor Stephen Gregory is embarking on an adventure of his own.  Forced to resign over his unpopular scientific beliefs, this once-distinguished professor gets the chance of a lifetime when he is offered an expedition into the heart of Africa in search of a creature that could prove his theories true once and for all. (From Amazon.com.)

Behemoth is a book that presents a compelling premise: what if dinosaurs still roamed the earth? What would change in the creation-evolution debate? What would be their response?

Because of this, I was eager to pick up this book. Unfortunately, it didn't live up to my expectations. Before I go into the reasons I disliked this book, however, there were some good points.

The research that went into this novel appeared to be fairly in-depth. At any rate, the writer knew what he was talking about when it came to the creation-evolution debate, and the possibility of dinosaur creatures in Africa.

Like I've already noted, the premise was interesting enough for me to pick up the book: it IS a good idea! Some of the creationist points the author raised were thought-provoking.

However, other good points are few and far between.

My biggest problem with this book was that it was a thinly disguised creationist tract. Sure, I'm a creationist myself, but dropping THREE lectures about creationism in one book is far too much. In fact, the creationist feel was so heavy that I wouldn't be surprised if the author wrote this book just to get a creationist point across.

That's the problem, I think. Many of the problems of this novel would be resolved if the writer had let the story tell itself instead of forcing it to go one way or another to suit his purposes. Instead, we're left with unrealistic plot turns and some "Wow, that's convenient" moments.

In the same vein, the creationists were, for the most part, portrayed as "the good guys" and the evolutionists were "the bad guys" who refused to look at evidence and called the creationists "zealots" all the time. I've looked into the debate myself, and there is evidence for both sides of the debate. The point of view from which this book was written was biased and simply unrealistic.

My second problem was the writing style. All of the characters sounded the same, and there were enough of them that I can't even remember any of their names while writing this review. That's the sign of poorly written characters: if your readers can't remember your characters, there's a problem. The evolutionists were all cut out of the same cardboard, and the creationists weren't much better. The writing quality itself was somewhere south of average.

Lastly, I expected the two main plot threads to combine somewhere near the end of the story, but they never did. It was somewhat irritating, but not much more than a minor point.

And, as a personal note, I felt that the female missionary (who became a tacked-on love interest), was hopelessly unrealistic, especially since I'm an MK (missionary kid) in Africa myself.

In summary, unless you can get it for free or very cheap, I don't recommend getting this book. It's simply not worth the effort.  Rated 6 out of 10.  Three stars.

My thanks to Thomas Nelson for the free copy of this book, which they gave to me in exchange for a review. I was not required to write a positive review.

Email ThisBlogThis!Share to TwitterShare to FacebookShare to Pinterest
Labels: Creationism

Well that's one NOT to bring into the store. Hey, Jake, do you have any "Summer Reading" picks you WOULD recommend? We're getting ready to do the "reader/staff recommended" shelf talkers at work. I'm looking for suggestions, especially of the non-fantasy kind. Fantasy we've kinda got covered between Bryan Davis, Frank Peretti, and Wayne Thomas Batson (can't get CH stuff yet, working on it)

Crazy Dangerous was very good, although I think you already have a Millard-Recommended sticker on it. Klavan's other books are awesome, if you don't already have them. I've also read the fantastic King Raven Trilogy recently, although those aren't too new.

That's about all the non-speculative-fiction books I can think of right now, though. Sorry I'm not much help! Right now, I'm mostly re-reading books and grabbing e-books from Booksneeze, so new titles are in short supply.

Thanks for the review. The idea of the book sounds interesting, but, as you said, it has to have more then just an interesting idea. (And I can never read a book unless I LOVE the characters) Sometimes a good plot makes up for flat characters, but rarely. And when the plot is good and the characters are annoying it is still a struggle to get through, even if it is to find out what happens.