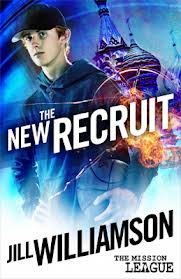 "Forced to choose between military school and a Christian spy organization, skeptic Spencer Garmond signs on with the Bible geeks. But before he even boards the plane for Moscow, Spencer realizes this is no Bible club.

These guys mean business.
Stumbling onto a case involving a gang of homeless boys, a chilling tattoo, and the always beautiful Anya Vseveloda, Spencer struggles to find the faith needed to save the Mission League from enemy infiltration."  (From Amazon.com.)

Marcher Lord Press is a “speculative fiction” publisher, and the speculations of The New Recruit follow two main paths: first, the existence of a “Christian spy” organization, and second, the existence (and, in some cases, fictionalization/dramatization) of the spiritual gifts mentioned in the New Testament.

Both of them together, in one book, made the book sound very intriguing, and I love Jill Williamson's excellent writing style. Still, I was wary after reading her other modern-day novel, Replication, which was so-so and not half as good as the Blood of Kings trilogy.

My fear proved groundless. Just like all Marcher Lord Press books, The New Recruit showed fantastic style, layout, and editing. Allow me to splurge a bit:

By far, my favorite part of the book was the voice of the main character, Spencer, combined with Williamson's incredible writing style. Her style is one of the best I've read – a combination of wry voice, a balance of action and internal monologue, and modern references and comparisons that make the style colorful.

Character-wise, Williamson brings the book to life. Even though Spencer is something of a loose cannon, you learn to like him, and, at least, care for him. He's human, and the way he approaches Christianity was fresh and original. I have rarely read a book that writes a skeptic so well. It's extremely easy to make such characters cheesy, but Williamson pulls it off.

The combination of Williamson's compelling style and plot makes this book a page-turner. I finished it in a day, which is something I rarely do as I get older. Williamson gives us teasing hints about Spencer's background and past – some of which are left unresolved – and gives us mysterious clues about where the plot is headed. The result is that you can hardly put this book down.

Williamson did a good job on theme as well. Like I've said, Spencer the skeptic is written very well, and likewise the “Christian spies” are presented in a way that makes them seem real. Each of these have their own problems, and Arianna especially comes across as a preachy sort of girl, which may be the intent of the author. In the end, though, the thoughts presented were thought-provoking and well worth thinking about.

I had very few problems with this book, although I'm not entirely certain how Biblical some of the contents are. The author herself mentions that the abilities of the characters are “fictional”, which resolves some of those questions, but the author also gives some very helpful verses to look into and compare to the themes addressed in the novel. This provokes the reader to read the Bible for themselves, and that's always a good thing!

The one big issue I had with the book was the way the adolescents interact. I've encountered this problem in all of Williamson's books, particularly in Replication, which soured my taste for the novel.

While Spencer is a non-Christian, Williamson seems to assume that whenever there is a remotely pretty girl in the same room as a remotely handsome male, there will be romantic flirtation. Over the course of the book, Spencer seems to lean toward one girl, and then another, and so on. Again, Spencer is a non-Christian, so I don't expect him to act like one. But even the Christian characters (i.e. Gabe, Nick, Ryan, etc.) have their “eye” on one girl or another. As an adolescent myself, I can say that I don't melt whenever a girl is in the room, like these characters do – and I certainly don't think about them all the time.

The book finished well, however, and left plenty of loose ends open for book two in the Mission League series. I can't wait!

On the whole, The New Recruit is an excellent, original beginning to a new series, combining an absorbing plot with equally interesting characters to create a novel you can't put down.

Awesome! Now I have to read it, after what you've said about her other books. : )