Review: The Tide of Unmaking 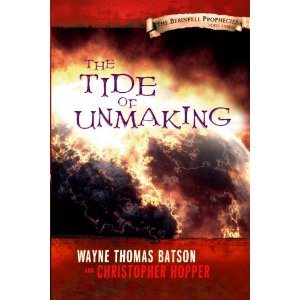 Seven years have passed since the Lords of Berinfell - Tommy, Kat, Jimmy, Johnny, Autumn and Kiri Lee - watched the horror of Vesper Crag wash away, as well as their fallen kinsman, Jett Green. But with Grimwarden in exile, the realm of Berinfell finds itself ill-equipped to weather the coming storms.

Kiri Lee begins to whisper of ghostly visitations. Taeva, Princess of the Taladrim, desperately seeks out the Elves of Berinfell to rescue her kingdom. And the genocidal Drefid Lord Asp launches his campaign to conquer Allyra. And Earth. But far worse still is a consuming terror on the horizon: an unstoppable force that threatens to devour all creation and all hope.
Nations will crumble, loyalties will be tested, and even the might of Berinfell’s Lords may not be enough to stem The Tide of Unmaking. (From Amazon.com.)

Wayne Thomas Batson and Christopher Hopper return at last with the final installment of The Berinfell Prophecies: The Tide of Unmaking.

I was privileged to have the opportunity to proof-read this book for the authors, so I got to read it a month or so before everyone else. (Huzzah!) As this was a self-published book, I was curious to see how the quality of the book measured up with the other two books of the series, Curse of the Spider King and Venom and Song.

As it turned out, mechanically speaking, The Tide of Unmaking was excellent. Balancing dialogue, description, action, and plot, the prose of this book was as good or better than the first two in the series, especially in the first hundred pages. While I felt that the quality of the rest of the book wasn't quite as good, as a whole The Tide of Unmaking was very well-edited.

The authors have said on multiple occasions that this book was going to be blow-your-pants-off epic. If the goal of the book was to be epic in scope, then the authors have certainly achieved their goal. Plotwise, The Tide of Unmaking was fantastic. It was fast-moving, causing the pages to speed by – even for someone like me, who was reading the book in order to give feedback – and had a wider scope than the previous two books, which had been mostly focused on the Elves. This book was much broader, introducing all of the races that inhabited Allyra, with their own unique cultures, wars, and characters.

In the tradition of the first two books, The Tide of Unmaking sends the Six Lords gallivanting around the entire known world, and then some, to defeat truly despicable villains and save two worlds: Allyra and Earth. We revisit places we know well and discover new locales. Allyra especially was vivid in detail and rich in history. In world-building, plot, and prose, then, the authors did very well.

In the character department, however, I felt that The Tide of Unmaking fell short. As a character-first novelist myself (a title that I've only recently accepted) perhaps I felt this absence more than others. Characters were minimally developed – enough to be “adequate” but never more so. Many of the characters felt shallow to me. (There is one notable exception, however: Taeva surprised me on many occasions. She was, by far, the most developed and rounded character in the book, and one of my favorites.)

The problem is that this occurs for each of the characters. They have their personality differences, but seldom more than that. They were developed enough for them to be realistic and somewhat three-dimensional, but not enough for us to really love them on a deeper level. Even scenes that should have revealed more character felt rushed in order to get to the “big events” of the plot.

Theme is inevitably tied to character. Where character is, there is the theme as well. And meaningful theme (which is what I expected, from reading Batson's Dark Sea Annals and Hopper's White Lion Chronicles) was conspicuously absent from this tale.

In The Tide of Unmaking, Tommy almost starts eating Mumthers' delicious food before thanking Ellos (God) for the meal. Sheepishly, he tacks on a prayer and then lets everybody eat. I felt like The Tide of Unmaking was similar; that the authors, in their haste to deliver “a good meal” to the readers, didn't take as much time as I would have liked to nourish the reader in spirit as well as in their thirst for a good story.

This wasn't to say that there was no theme, however; there were smaller themes here and there. And these are well and good. But as a whole, The Tide of Unmaking just didn't deliver all the sections of the “story pyramid” to create a fully nourishing tale.

However, don't take this to mean that this book isn't great. The Tide of Unmaking is worth every penny, and at a fantastic eBook price, what are you waiting for? Buy the book and judge for yourself. I definitely recommend it, especially to fans of the previous Berinfell Prophecies books. You'll find here a war cry for the valiant soul.

Rated 8.5 out of 10.  (Four stars.)  Recommended for any Christian fantasy lover!

I want to be able to proof read a book like this.